Correa reflexa, commonly known as common correa or native fuchsia, is a shrub in the Rutaceae family, which is endemic to Australia.

Plants are quite variable and a large number of varieties and local forms have been identified. Heights vary from prostrate to 1.5 metres high. Leaves are generally oval in shape and range from 10mm to 50mm long. Their surfaces often have visible oil glands and short hairs.cThe pendant, tubular flowers occur in groups of 1 to 3 and are up to 40 mm long with 4 flaring triangular tips. Colour is variable including pale green, red with yellow tips and other variations.
The species was first formally described in 1800 by botanist Jacques Labillardière in Relation du Voyage à la Recherche de la Pérouse based on the type from Adventure Bay in southern Tasmania. He gave it the name Mazeutoxeron reflexum. The species was transferred to the genus Correa in 1803 by Étienne Pierre Ventenat in Jardin de la Malmaison.
This post is part of the Floral Friday Fotos meme. 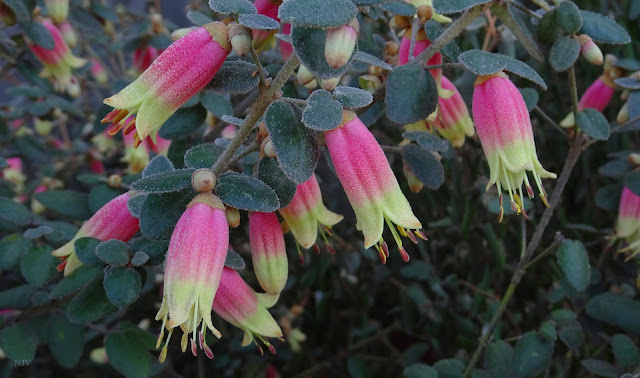