Bushfires (=wildfires, or forest fires) in Australia are frequently occurring events during the hotter months of the year due to Australia's mostly hot, dry climate. Large areas of land are ravaged every year by bushfires, which also cause property damage and loss of life.

Major firestorms that result in severe loss of life are often named based on the day on which they occur, such as Ash Wednesday and Black Saturday. Some of the most intense, extensive and deadly bushfires commonly occur during droughts and heat waves, such as the 2009 Southern Australia heat wave, which precipitated the conditions during the 2009 Black Saturday bushfires in which 173 people lost their lives.

We are currently experiencing a severe bushfire season, which has started early and is still burning in New South Wales and Eastern Victoria. A drought has plagued eastern Australia since early 2017, and rainfall in November was the lowest ever on record, according to the Bureau of Meteorology. Death toll is now at 17 (including three firefighters), with nearly 500 homes lost over the New Year period.

In Melbourne, we are experiencing very bad air quality, a choking smell of smoke and widespread hazy conditions as the smoke from the East Gippsland fires drifts across hundreds of kilometres to reach the City. It makes for red sunsets, which serve as reminder of the devastation these bushfires are causing throughout our country...

You can help the thousands of victims who have lost loved ones, property and the roofs over their heads, here. 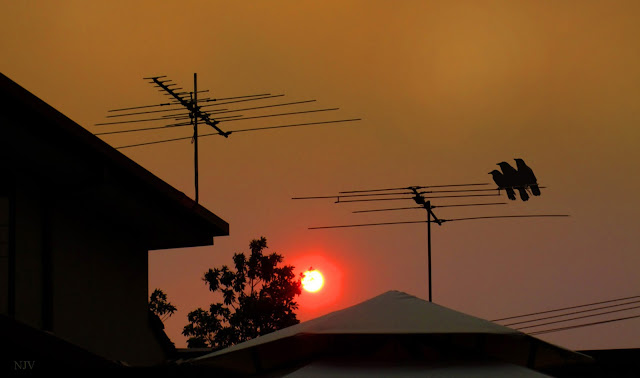