Aswan, formerly spelled Assuan, is a city in the south of Egypt, the capital of the Aswan Governorate. Aswan is a busy market and tourist centre located just north of the Aswan Dams on the east bank of the Nile at the first cataract. The modern city has expanded and includes the formerly separate community on the island of Elephantine.

Aswan is the ancient city of Swenett, which in antiquity was the frontier town of Ancient Egypt facing the south. Swenett is supposed to have derived its name from an Egyptian goddess with the same name. This goddess later was identified as Eileithyia by the Greeks and Lucina by the Romans during their occupation of Ancient Egypt because of the similar association of their goddesses with childbirth, and of which the import is "the opener". The ancient name of the city also is said to be derived from the Egyptian symbol for trade, or market.

Because the Ancient Egyptians oriented toward the origin of the life-giving waters of the Nile in the south, Swenett was the first town in the country, and Egypt always was conceived to "open" or begin at Swenett. The city stood upon a peninsula on the right (east) bank of the Nile, immediately below (and north of) the first cataract of the flowing waters, which extend to it from Philae. Navigation to the delta was possible from this location without encountering a barrier. 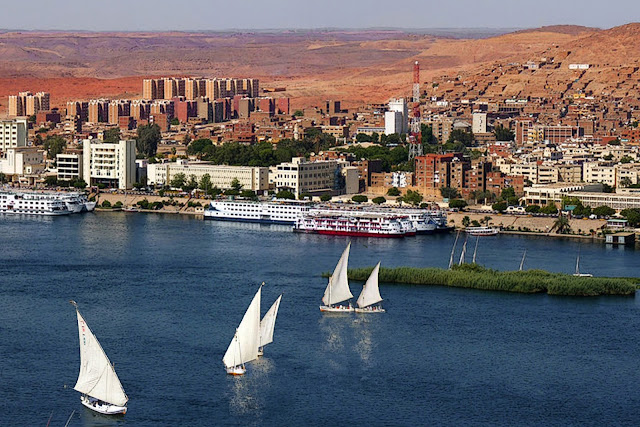 and also part of the Wordless Wednesday meme
Posted by My Desktop Daily at 01:58